Oscar Halecki, who distinguished four regions in Europe (Western, West Central, East Central and Eastern Europe) defined East-Central Europe as a region from Finland to Greece,[8] the eastern part of Central Europe, between Sweden, Germany, and Italy, on the one hand, and Turkey and Russia on the other.[9] According to Halecki, in the course of European history, a great variety of peoples in this region created their own independent states, sometimes quite large and powerful; in connection with Western Europe they developed their individual national cultures and contributed to the general progress of European civilization.[9] 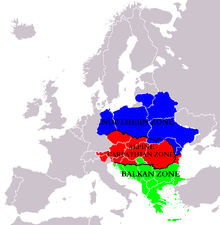 South-Eastern Europe is distinguished from the Balkans, defined as the region consisting of most of the countries in the Socialist Federative Republic of Yugoslavia – Bosnia and Herzegovina, Croatia, Serbia, Montenegro, Macedonia, plus Albania and Bulgaria. The report précised that Romania and Greece are sometimes incorrectly regarded as Balkan countries.

East-Central Europe is sometimes defined as eastern part of Central Europe [20][21] and is limited to member states of Visegrád Group - Poland, Czech Republic, Slovakia and Hungary. This definition is close to the German concept of de:Ostmitteleuropa.