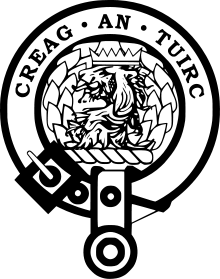 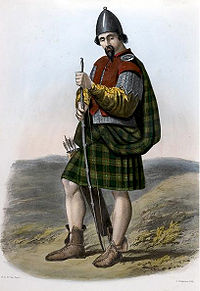 A romanticised Victorian-era illustration of a MacLaren clansman by R. R. McIan from The Clans of the Scottish Highlands published in 1845.

The origins of the clan are uncertain, but by tradition the MacLarens are descended from Loarn mac Eirc of Dál Riata, who landed in & settled Argyll in 503 A.D. The clan name is supposedly derived from Lorn (variations Loarn, Laurin, Laren); these variations are all ultimately pronounced Lawrin by the Gael. However there is no concrete evidence of Lorn being the progenitor of the family. A more likely origin of the clan is that they take their name from a 13th century abbot called Laurance of Achtow. This theory is also supported by the MacLaren rallying cry which in gaelic is: "Creag an Tuirc" which means "Boars Rock". The rock in question is near Achtow in Balquhidder.

In 843 A.D., Kenneth MacAlpin, chief of the posterity of the above brothers & their followers, overthrew the southern Picts(this is debatable, evidence points to short period of power-struggle), took possession of their territories, & transferred the seat of Government to their capital, Abernethie, in Strathearn, country of Perthshire. MacAlpin was subsequently crowned King, but of what really? Tradition holds he was crowned King of all Scotland; however, his name sits in the Pictish Chronicle of kings. He is the 5th to last Pictish king listed, giving credit to the theory of fusion. MacAlpin was of Gaelic origin, meaning he had to have formed a foreign dynasty in the Pictish institution. The meeting of King Constantine and Bishop Cellach at the Hill of Belief near the (formerly Pictish) royal city of Scone in 906 cemented the rights and duties of Picts on an equal basis with those of Gaels. Hence the change in styling from King of the Picts to King of Alba. Alba is Gaelic for Scotland.

It was well-known practice for conquerors to apportion the lands they acquired among their victorious followers; and it is somewhat stronger than assumption to say, that the chief of the tribe of Laren, of Argyle, received a due share. Balquihidder and Strathearn has ever been known as "the country" of the Clan Laren

It is also believed the MacLarens were followers of the ancient Earl of Strathearn and were cadets of that ancient house when they fought at the Battle of the Standard under King David I of Scotland in 1138.

During the Wars of Scottish Independence the Clan MacLaren fought for King Robert the Bruce at the Battle of Bannockburn in 1314.

The MacLarens were a warlike clan and had many feuds with their neighbouring clans. However they forged a powerful alliance with the House of Stuart or Clan Stuart when a daughter of the MacLaren family married a Stuart Lord of Lorn in the 15th century. The first son of this union was called Dougall and went on to become the progenitor of the famous Clan Stuart of Appin.

In 1463 Sir John Stewart was murdered outside the church, just as he was about to marry his MacLaren wife. He was murderd by Alan MacCoul, an ally of the Clan MacDougall. However his murder was avenged in 1468 when the Clan Stuart and Clan MacLaren together defeated the Clan MacDougall at the Battle of Stalc which took place opposite Castle Stalker. In 1469 The Clan MacLaren assisted Dugel Stewart of Appin, son of John Stewart when he attempted by force to obtain possession of his father's lands. 130 MacLarens were killed when the battle took place at the foot of the mountain called Bendoran.

In 1488 the Clan MacLaren fought at the Battle of Sauchieburn in support of King James III of Scotland.

In 1497 some of the Clan MacLaren stole cattle from the Braes of Lochaber from the Clan MacDonald of Keppoch. The MacDonalds followed them and overtook them at a place called Glenurchy where a battle took place. The MacDonalds won and recovered their cattle. The MacLarens then looked for assistance from Dugel Stuart of Appin. Another battle then took place where the MacLarens were now joined by the Stuarts against the MacDonalds. During the battle Dugel, the chief of Clan Stuart and the chief of Clan MacDonald of Keppoch were both killed.

On the day of a fair where the Clan MacLaren were busy buying, selling and enjoying themselves word came that the Clan Buchanan were marching up towards them through Strathyre. There was no time to lose and the Clan MacLaren rushed to arms. The MacLarens had not all come in by the time the Buchanans arrived, however they were not daunted and attacked the Buchanans. At first the Buchanans were faring better and drove the MacLarens back. The Chief of MacLarens saw one of his sons cut down and being suddenly seized with battle madness turned and shouted the MacLaren battle cry "Creag An Tuirc" and whirling his Claymore rushed furiously at the enemy. His clansmen followed him and the Buchanans were cut down like corn. Only two escaped by swimming the River Balvaig but even they were followed. One was cut down at Gartnafuaran and the second was cut down at a place since known by the circumstance as Sron Laine.

By the end of the 15th century many MacLarens had emigrated to serve in the military of France and Italy and by the time of the 16th century they were described as a broken clan.

In the 17th century although the Clan MacLaren had reduced in numbers a branch of the clan distinguished itself in Sweden by the time of the Thirty Years' War. The modern writer Carl G. Laurin is one of many who carry the name in Scandinavia.

The current clan chief is Donald MacLaren of MacLaren and Achleskine.[1]

He was an independent parliamentary candidate against then-Prime Minister of United Kingdom Gordon Brown in the constituency of Kirkcaldy and Cowdenbeath at the 2010 general election, eventually finishing 7th out of the 8 candidates with a total of 165 votes.

The Clan seat is at Balquhidder in the Trossachs. The local hill of Creag an Tuirc (Boar's Rock) is the Clan's rallying point and its name is used as their war cry. Annual meetings of the clan are held at the Lochearnhead Highland Games at the end of July.

More can be found at the Clan MacLaren Society of North America website.